The site is secure.
The https:// ensures that you are connecting to the official website and that any information you provide is encrypted and transmitted securely.

The Indicators of Broadband Need map was created by the United States Department of Commerce, National Telecommunications and Information Administration (NTIA). The map uses several different data sources to show information on broadband availability within the United States. Layers in this map were created using data sourced from the American Community Survey collected by the U.S. Census, Ookla, Measurement Lab (M-Lab), Microsoft and the Federal Communications Commission (FCC). In addition, there is a layer in the map that displays the locations of higher education institutions eligible as Minority Serving Institutions (MSIs) under NTIA's Connecting Minority Communities grant program. There is also a layer that shows areas designated as American Indian, Alaska Native and Native Hawaiian Areas by the U.S. Census in 2020. A list of data sources with descriptions can be found by clicking on the information widget in the map as well as instructions on how to download the county, census tract and census block level data used in the map.

BroadbandUSA Community Reports can be generated for each state and county in the United States, offering broadband and socio-economic metrics for the area selected. Data sources include the U.S. Census American Community Survey, Ookla, Measurement Lab (M-Lab), the Federal Communications Commission (FCC) and Esri Business Analyst. The BroadbandUSA Community Reports were created by the National Telecommunications and Information Administration (NTIA) in the U.S. Department of Commerce. 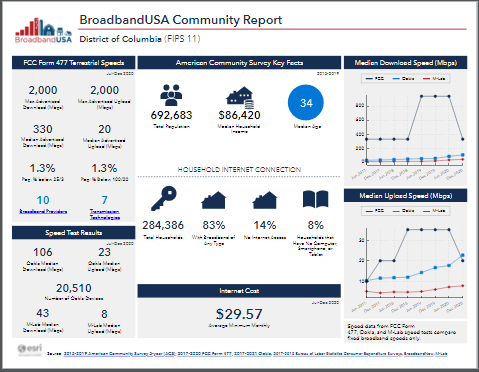